We have made virus with the first of the vector constructs that we made (our non-target shRNA control). Our infected cells seem to be selecting properly (SKOV-3 human ovarian cancer cells) and we anticipate having cells lines to work with soon....In the process of working with the construct, we did learn several things; the plasmid (empty) is easily grown in bacteria on the usual concentrations of amp (we use 150). However, bacteria containing a vector + insert grows poorly compared to empty vector. We got around this by reducing our amp to 75 micrograms/ml and incubating the transformants o/n at 37 degrees, then o/n at room temp. At that point, the colonies were big enough to see and to pick. We then grew them in LB with reduced amp to do minipreps. Once we had a clone, we then grew that clone up by preparing a 5ml o/n which was used to inoculate a liter of terrific broth the following day. In this way, we got robust growth. We sent everything out for sequencing and did not pick up any problems with the vectors around the insertion site. To make virus, we transformed 293T cells with the vector and our packaging plasmids (equivalent to the packaging plasmids sold by invitrogen as "viropower". We collected virus in 5mls (on a 100 cm dish) instead of our usual 10 mls. Preliminarily, it does seem that we recovered fairly high titer virus, at least for our control shRNA.

The expected pattern of bands was observed. 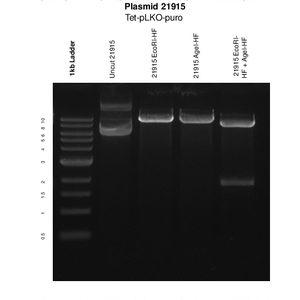