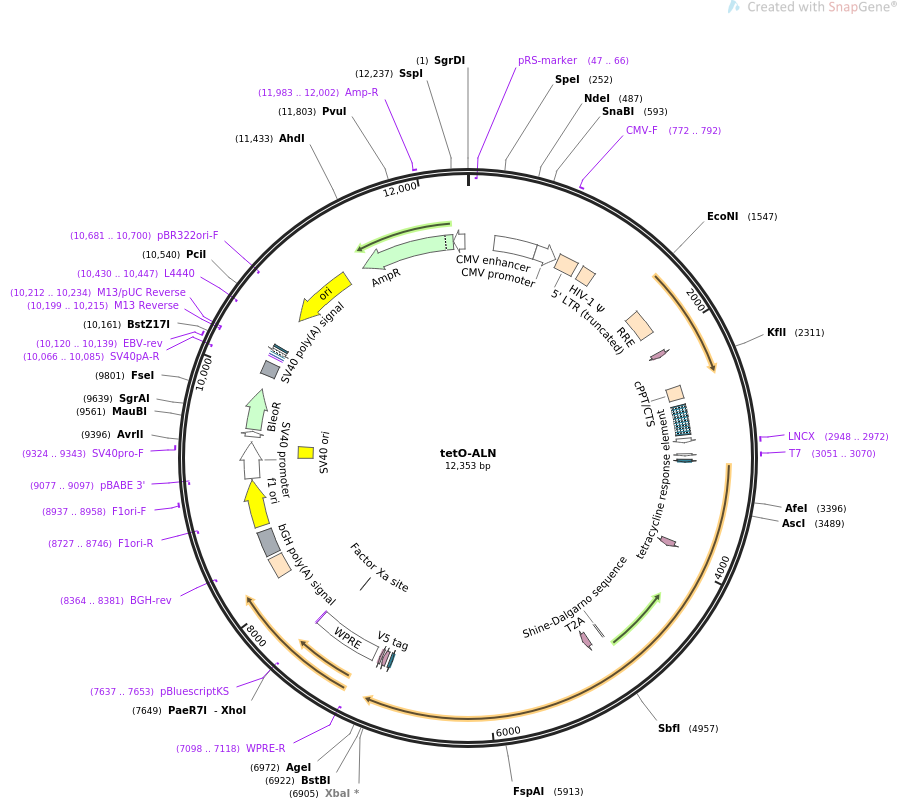 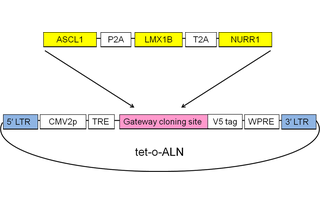 To make a drug-inducible lentiviral vector that is compatible with Gateway recombination (Invitrogen), the depositing laboratory removed the OCT4 open reading frame from FU-tetO-hOCT4 (Addgene plasmid 19778) and replaced it with a Gateway cassette cloned from pEF-DEST51 (Invitrogen) to generate FU-tetO-Gateway (Addgene plasmid #43914).

The 3 ORFs were then joined via recombinant PCR such that viral 2A peptide sequences separate the three genes, using B1-ASCL1-FWD and B2-NURR1-REV. A glycine-serine-glycine (GSG) linker was included upstream of each 2A sequence to facilitate protein cleavage.

The ASCL1-P2A-LMX1B-T2A-NURR1(ALN) cassette was cloned into pDONR221, and subsequently cloned into FU-tetO-Gateway via Gateway recombination to produce the tetO-ALN vector.

Cleavage at 2A sites was verified by performing in vitro transcription and translation using the TnT T7 Coupled Reticulocyte Lysate System (Promega L4610) in the presence of biotinylated lysine (Promega L5061). 5 µL of each TnT-generated protein sample was resolved via PAGE, transferred to PVDF membrane, incubated with streptavidin-conjugated horseradish peroxidase (Cell Signaling Technology 3999, 1:2000), and detected with ECL Plus (GE Healthcare RPN2132).