The CRISPR revolution shows no signs of slowing down. This prokaryotic immune system is especially amenable to genome engineering, offering flexibility and easy multiplexing/scaling. Prokaryotes have long utilized CRISPR as a powerful defensive strategy against viral invaders, and this system is proving to be just as useful (if not more so) for research applications, eclipsing past genome engineering technologies like zinc finger nucleases (ZFNs) and TALENs.

CRISPR (Clustered Regularly Interspaced Short Palindromic Repeat) sequences were initially discovered in the E. coli genome in 1987, but their function as a safeguard against bacteriophages was not elucidated until 2007. Scientists hypothesized that prokaryotes used CRISPR as part of an adaptive immune system - utilizing various CRISPR-associated (Cas) genes to not only store a record of invading phages but also to destroy the phages upon re-exposure.

More specifically, specialized Cas proteins snip foreign DNA into small fragments approximately 20 bp in length and paste them into contiguous stretches of DNA known as CRISPR arrays. Separate Cas proteins then express and process the CRISPR loci to generate CRISPR RNAs (crRNAs). Through sequence homology, these crRNAs guide a Cas nuclease to the specified exogenous genetic material, which must also contain a species-specific sequence known as a protospacer adjacent motif (PAM). The CRISPR complex binds to the foreign DNA and cleaves it to destroy the invader (Figure 1). 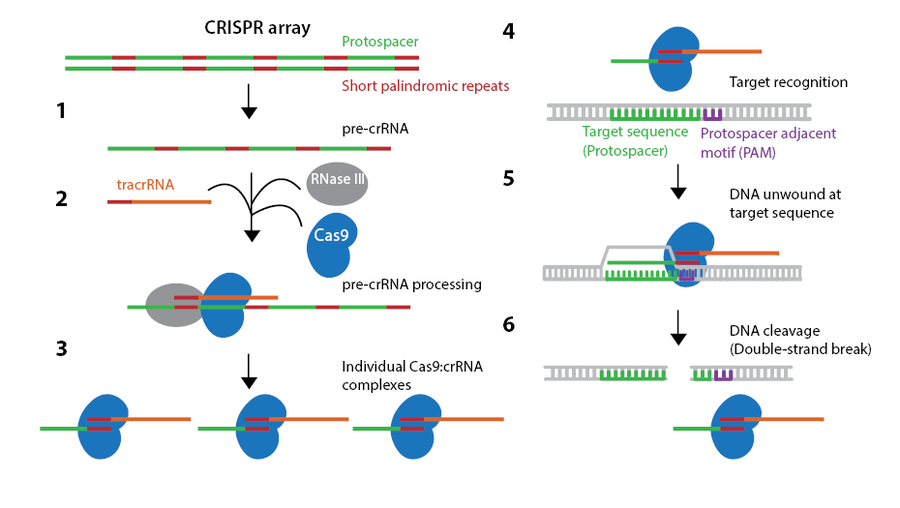 Figure 1: An overview of the endogenous Type II bacterial CRISPR system. Within the bacterial genome, a CRISPR array contains many unique protospacer sequences that have homology to foreign DNA. Protospacers are separated by short palindromic repeat sequences. (1) The CRISPR array is transcribed to make the pre-CRISPR RNA (pre-crRNA). (2) The pre-crRNA is processed into individual crRNAs by a special trans-activating crRNA (tracrRNA) with homology to the short palindromic repeat. The tracrRNA helps recruit RNAse III and Cas9 enzymes, which together separate the individual crRNAs. (3) The tracrRNA and Cas9 nuclease form a complex with each individual, unique crRNA. (4) Each crRNA:tracrRNA:Cas9 complex seeks out the DNA sequence complementary to the crRNA. In Type II CRISPR systems, a potential target sequence is only valid if it contains a special Protospacer Adjacent Motif (PAM) directly after where the crRNA would bind. (5) After the complex binds, Cas9 separates the double stranded DNA target and cleaves both strands near the PAM. (6) The crRNA:tracrRNA:Cas9 complex unbinds after the double-strand break.


CRISPR systems, found in 95% of archaeal and 48% of bacterial genomes, are highly diverse, with varying PAM sequences and number/types of Cas proteins. Makarova et al.’s classification defines 5 types and 16 subtypes based on shared characteristics and evolutionary similarity. These are grouped into two large classes based on the structure of the effector complex that cleaves the genomic DNA. Type II CRISPR was the first system harnessed for genome engineering, with Type V following in 2015.

Fighting Back: Anti-CRISPR Genes in Phage

The CRISPR adaptive immune system seems like a winning strategy to ensure prokaryotic survival, but it is not invincible. Bondy-Denomy et al. identified the first set of anti-CRISPR genes in bacteriophages infecting Pseudomonas aeruginosa. Anti-CRISPR genes employ varied mechanisms to block CRISPR. Some prevent the CRISPR-Cas complex from binding to DNA. Others inhibit the recruitment of Cas proteins to the CRISPR-Cas complex. Recently, researchers have begun to use anti-CRISPRs as off-switches for CRISPR genomic editing.

In 2012, Jinek et al. first demonstrated that CRISPR could be programmed for targeted DNA cleavage in vitro. In 2013, Cong et al. and Mali et al. described CRISPR-based genome editing in mammalian cell culture. Five years later, PubMed lists more than 6,300 CRISPR-related publications, many of which detail work to improve the tool’s specificity, orthogonality, and multiplexibility in various species, as well as the development of new applications.

The first CRISPR papers described two main categories of genome edits. First, the double-strand break (DSB) induced by Cas9 could be repaired through non-homologous end joining (NHEJ), an error-prone process that produces insertions/deletions disrupting a target gene. On the other hand, if a repair template with homology arms was supplied, the break could be repaired according to this template, allowing for precise gene editing. These edits can include mutations seen in human patients, protein tags, or loxP/FRT sites, among others. Homology-directed repair (HDR) allows us to create a variety of modifications in endogenous loci with unprecedented speed and specificity. 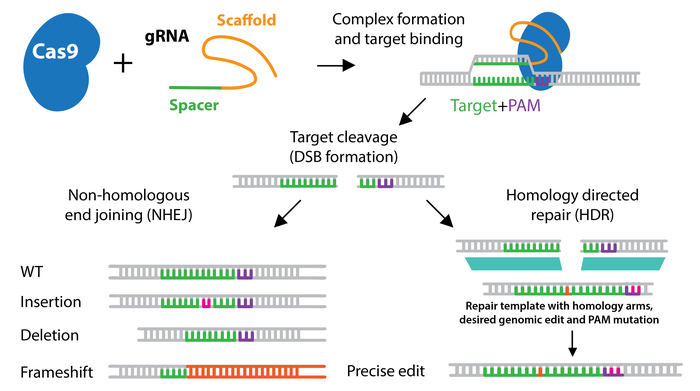 Figure 2: An overview of CRISPR and NHEJ/HDR. The Cas9/gRNA complex produces a DSB at the target genomic locus. Repair will proceed through NHEJ or HDR depending on the experimental conditions.


Genome editing with CRISPR is not only simple, but also scalable. Multiple gRNAs targeting multiple loci can be easily expressed in the same cell or organism. The ability to precisely target CRISPR to a given locus makes it especially amenable to genetic screens. Pooled gRNA libraries can be used to identify genes that are important to a given phenotype. Current libraries are available for gene knockout, as well as transcriptional activation or repression. Combined with the power of next-generation sequencing, CRISPR is a robust system for genome-wide screening.

Researchers have expanded the CRISPR field beyond SpCas9, moving us closer to being able to target every locus in every genome.

Scientists have also developed CRISPR editing technologies that do not rely on NHEJ or HDR:

Scientists have also used the targeting capability of Cas9 to make other types of modifications at specific loci.

It’s amazing to see how much progress has been made in just five years, with the skyrocketing popularity of CRISPR echoing that of RNAi and iPS cells. Genome engineers continue to work to develop a highly specific, programmable platform well-suited for various biological and translational technologies. Biotechnology companies are exploring therapeutic applications of CRISPR to treat genetic disease, with the caveat that off-target editing risk must be made very low or nonexistent. Scientists continue to wrestle with the possibility of postnatal and germline editing, with the International Summit of Human Gene Editing convened in 2015 to discuss the ethics associated with CRISPR in agricultural and therapeutic applications.

Despite the ethical controversies surrounding non-research applications, it’s clear that CRISPR is a truly disruptive technology for basic research. The beauty of CRISPR is that it’s adaptable to almost any model system or biological topic, and you don’t need to be an expert to see results!

Getting Started with CRISPR

Addgene has empowered researchers to further develop the CRISPR toolkit by posting lab protocols, providing tips from experts in the field, and enabling access to multiple plasmids used for various platform applications. For more information on CRISPR, check out Addgene’s CRISPR Guide and CRISPR blog posts, or find CRISPR plasmids for your research. Addgene has CRISPR plasmids for the following models: