Bacteria and archaea have evolved adaptive immune defenses termed clustered regularly interspaced short palindromic repeats (CRISPR)/CRISPR-associated (Cas) systems that use short RNA to direct degradation of foreign nucleic acids. We have engineered the type II bacterial CRISPR system to function with custom guide RNA (gRNA) in human cells: this involves co- expression of a Cas9 protein bearing a C terminus SV40 nuclear localization signal with one or more guide RNAs (gRNAs) expressed from the human U6 polymerase III promoter. Cas9 unwinds the DNA duplex and cleaves both strands upon recognition of a target sequence by the gRNA, but only if the correct protospacer-adjacent motif (PAM) is present at the 3′ end (see Figure). 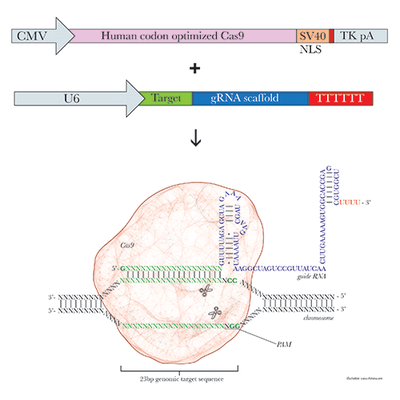 We provide a collection of reagents for custom CRISPR mediated gene-targeting.

A genome-wide resource of ~190k unique gRNAs targeting ~40.5% of human exons can be accessed here.

We have characterized a set of orthogonal Cas9 proteins to allow multiple Cas9-mediated activities to be performed simultaneously within individual cells. Because these proteins recognize different guide RNAs, they can be independently targeted to distinct sets of sequences. Our currently available set of Cas9 proteins includes three orthogonal variants optimized for use in human cells and four orthogonal variants usable in bacteria.

Streptococcus pyogenes (SP): This is the classical Cas9 protein used in most studies to date.

Neisseria meningitidis (NM): Significantly smaller than the above Cas9 protein, NM is comparably active as a nuclease and a transcriptional activator.

Streptococcus thermophilus #1 (ST1): Almost as small as NM, ST1 consistently yields slightly higher activities than the others as a nuclease and as an activator, but is more restricted in the sequences it can target.

SP, NM, ST1: all of these efficiently mediate cutting and repression in bacteria, with NM exhibiting slightly superior repression.

Treponema denticola (TD): Larger than SP, it mediates efficient cutting and nicking in bacteria but performs poorly as a transcriptional repressor.

All genes except the SP nuclease are human codon optimized but function well in E. coli . Bacteria expressing NM and TD may grow slightly more slowly than those expressing SP and ST1.

Please note that NM, ST1, and TD recognize different PAMs than does the classical SP Cas9. We experimentally determined these PAMs using a highly stringent selection, which revealed that PAM recognition is more complex than previously thought. In particular, combinations of highly unfavorable bases at positions adjacent to those formally required can significantly reduce activity, while particular protospacers interact nonlinearly with different PAM sequences to determine overall activity at the site. For example, when paired with either of the protospacers utilized in our selection, we observed that NM will recognize sequences with PAMs matching:

just as well as the PAM determined by bioinformatics, NNNNGATT. However, it is possible that NNNNGATT will prove superior for less favorable protospacers and applications requiring particularly tight binding. In these cases it may be advisable to use the consensus sequence. See the publication for details.