TALENs are fusions of transcription activator-like (TAL) effectors of plant pathogenic Xanthomonas spp. to the FokI nuclease. TALENs bind and cleave DNA in pairs, and their binding specificity is determined by customizable arrays of polymorphic amino acid repeats in the TAL effectors. This collection and accompanying documentation allow one to efficiently assemble TALEN constructs with custom repeat arrays, each containing 15 repeats.

Available to academics and nonprofits only.

Transcription activator-like effector nucleases (TALENs) are a new class of engineered nucleases that, due to their modular domain structure, have proven more straightforward to design and construct for performing genome editing than other types of nucleases. TALENs are typically designed as a pair that binds to genomic sequences flanking a target site and generates a double-strand break, which is repaired by the cell using either homology-directed repair (HDR) or the error-prone process of nonhomologous end-joining (NHEJ). 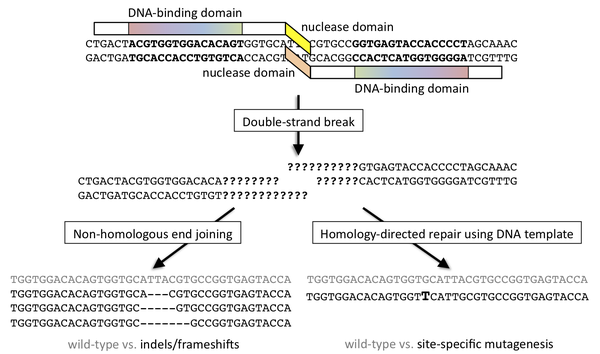 The DNA-binding domain of a TALEN comprises an array of 34-amino-acid monomers that are ‘‘coded’’ to recognize and bind specific DNA base pairs (bp) in a 1:1 fashion. We have built upon previously described modular Golden Gate methodologies to allow assembly of multiple DNA fragments in an ordered fashion, such that a single ligation of preassembled tetramers and trimers generates TALENs that recognize any 15 bp recognition site in the genome.

This assembly method requires only 1-2 days for completion and is not prone to errors that complicate methods that rely on PCR amplification of monomers. Furthermore, we have developed a set of optimized vectors and methods for the delivery of TALENs into mammalian cells and, in particular, human pluripotent stem cells and other difficult-to-transfect cell types.

In brief, we transfect or electroporate TALEN pairs into cells and then subject them to fluorescence-activated cell sorting (FACS) 48 hr posttransfection based on fluorescent-marker expression. We replate the sorted cells at low density and allow them to recover and grow for 1 week, resulting in the formation of distinct single colonies. Colonies are expanded, genomic DNA purified, and mutations analyzed by PCR, agarose-gel screening, and Sanger sequencing. The entire process from start to finish can be completed in less than one month. 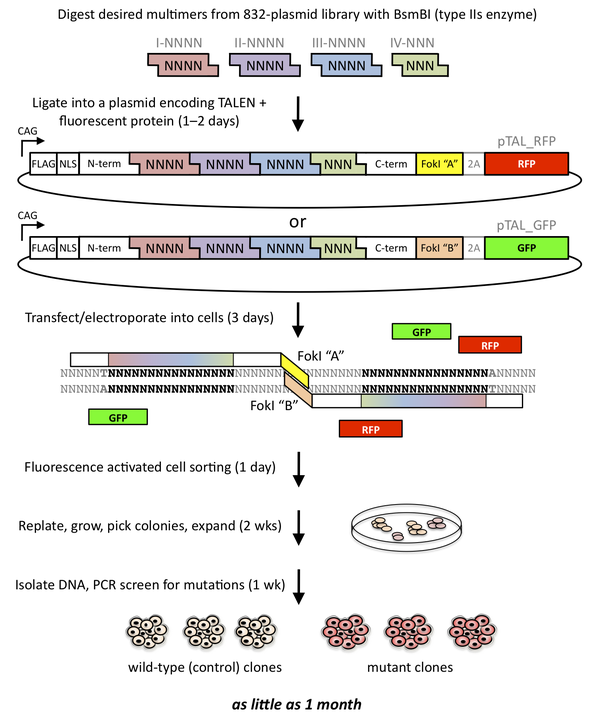 For example, to recognize the sequence 5'-GATGATCTCAGAGGC-3', use the plasmids called I-GATG, II-ATCT, III-CAGA, and IV-GGC. These plasmids can be ordered either individually or as part of the full 834-plasmid Kit.

The inserts from these plasmids are then assembled into either pTAL_GFP or pTAL_RFP via a single ligation reaction. To create a working TALEN pair, one of the TALENs should be assembled in pTAL_GFP and the other in pTAL_RFP, as the two pTAL plasmids encode distinct FokI nuclease domains that form an obligate heterodimer.

The full sequences for the pTAL_GFP and pTAL_RFP plasmids in GenBank format, as well as a spreadsheet with the insert sequences of the I/II/III/IV vectors, is available as a ZIP file (see "Protocols & Resources" tab).

A detailed protocol for the assembly of TALENs with this Kit and their use to perform genome editing of cells is available at StemBook. A PDF of the protocol can be downloaded from that page.

How to Cite this Kit

These plasmids were created by your colleagues. Please acknowledge the Principal Investigator, cite the article in which they were created, and include Addgene in the Materials and Methods of your future publications.

For your Materials and Methods section:
"The plasmid kit used for generation of TALENs was a gift from Kiran Musunuru and Chad Cowan (Addgene kit # 1000000034)"

Each circle corresponds to a specific antibiotic resistance in the kit plate map wells.

Searchable and sortable table of all plasmids in kit. The Well column links to its kit plate map on the right, as well as lists the plasmid well location in its plate. The Plasmid column links to a plasmid's individual web page.

96-well plate map for plasmid layout. Hovering over a well reveals the plasmid name, while clicking on a well opens the plasmid page.