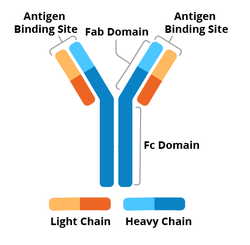 Antibodies are produced by the immune system to help defend against invaders such as bacteria, viruses, or even perceived threats such as proteins in peanuts or plant pollen. They are large proteins that bind to an antigen, a particular part of a foreign substance. In addition to being useful for our bodies to fight off intruders, antibodies are also extremely useful to researchers in a lab. When an antibody binds tightly to a specific antigen, scientists can use it to pull out a protein of choice from a mix of other proteins, visualize a protein under a microscope, or detect when the protein is present in a sample--just to name a few.

A standard antibody is made up of 4 protein chains: two large heavy chains and two small light chains. These four domains come together to form a “Y” shape, as shown in the picture to the right. The two arms of the Y structure are responsible for binding the antigen, and are called the antigen binding fragments (Fab). The tips of the Fab fragments contain highly variable regions, shown in light blue and orange, that bind to a specific antigen, triggering an immune response. The other part of the antibody is the constant region, shown in dark blue and orange, which is the same within each class of antibody. Antibodies are divided into five major classes, IgM, IgG, IgA, IgD, and IgE, based on their constant region structure and immune function.

Traditional sources of antibodies for research purposes include animals or hybridoma cells, but are difficult to generate due to expense and time. An alternative approach is to use synthetically produced recombinant antibodies, created by cloning antibody components into plasmids and expressing these in bacteria, mammalian cells, yeast, plants, or insect cells. Benefits include consistency between lots and the ability to optimize the antibody’s antigen binding sequence to improve binding and reproducibility.

Other scientists may choose to work with a smaller fragment of an antibody, which could offer increased stability and ease of production due to their small size. These recombinant antibody fragments can be used in experiments such as immunoprecipitation and super-resolution microscopy. Two commonly used plasmid-based antibody fragments are described below: 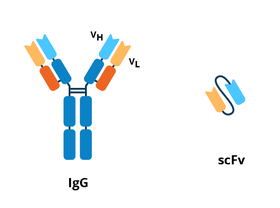 ScFvs (single-chain variable fragment) include parts of the variable regions of heavy (VH) and light chains (VL) fused together to form a single polypeptide. Unlike full length antibodies, which are often produced in mammalian cell cultures, scFvs are often produced in bacterial cell cultures such as E. coli. While full-length antibodies generally do not fold properly in the cytoplasm, soluble scFv antibodies have been successfully expressed. The Vale lab has created several scFv fragments which bind to the GCN4 peptide, from the SunTag system, fused to sfGFP for imaging. 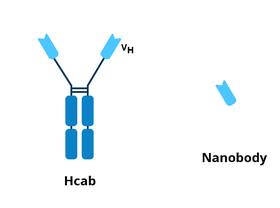 Nanobodies are small single chain antibodies that are derived from an unusual type of IgG antibody called a heavy chain antibody (HCab), which are unique to camels, llamas, alpacas and other camelids. In terms of structure, HCabs are like a pared down version of a standard IgG antibody. Their small size also allows better tissue penetration and decreases the distance between a fluorescent tag and the target antigen, which can lead to higher resolution for super-resolution microscopy. Examples include secondary antibodies from the Gorlich lab and GFP nanobodies from the Cepko lab.

The following table highlights plasmid collections that can be used to create and express plasmid-based antibodies.

The table below highlights plasmids that feature expression of antibodies, nanobodies or ScFvs. Use the search bar or sort buttons to find antibody plasmids for:

Do you have suggestions for other plasmids that should be added to this list?

Fill out our Suggest a Plasmid form or e-mail [email protected] to help us improve this resource!