A promoter is a region of DNA where transcription of a gene is initiated. Promoters are a vital component of expression vectors because they control the binding of RNA polymerase to DNA. RNA polymerase transcribes DNA to mRNA which is ultimately translated into a functional protein. Thus the promoter region controls when and where in the organism your gene of interest is expressed.

Promoters are about 100-1000 base pairs long and are adjacent and typically upstream (5’) of the sense or coding strand of the transcribed gene. The coding strand is the DNA strand that encodes codons and whose sequence corresponds to the mRNA transcript produced. The antisense strand is referred to as the template strand or non-coding strand as this is the strand that is transcribed by the RNA polymerase.

Promoter binding is very different in bacteria compared to eukaryotes. In bacteria, the core RNA polymerase requires an associated sigma factor for promoter recognition and binding. On the other hand, the process in eukaryotes is much more complex. Eukaryotes require a minimum of seven transcription factors in order for RNA polymerase II (a eukaryote-specific RNA polymerase) to bind to a promoter. Transcription is tightly controlled in both bacteria and eukaryotes. Promoters are controlled by various DNA regulatory sequences including enhancers, boundary elements, insulators, and silencers. 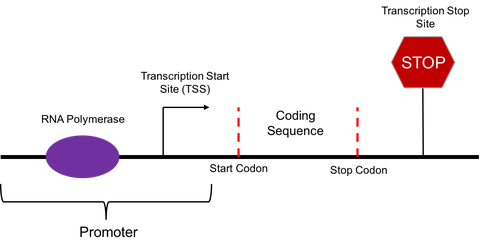 There are three main portions that make up a promoter: core promoter, proximal promoter, and distal promoter. Below describes the specifics of these regions in eukaryotic cells. 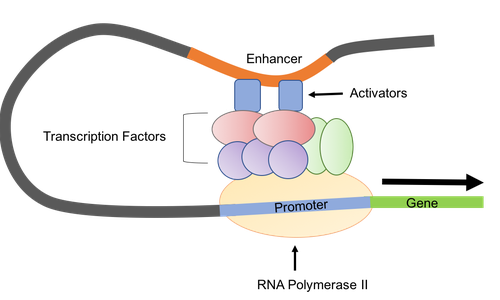 Promoters in bacteria contain two short DNA sequences located at the -10 (10 bp 5' or upstream) and -35 positions from the transcription start site (TSS). Their equivalent to the eukaryotic TATA box, the Pribnow box (TATAAT) is located at the -10 position and is essential for transcription initiation. The -35 position, simply titled the -35 element, typically consists of the sequence TTGACA and this element controls the rate of transcription. Bacterial cells contain sigma factors which assist the RNA polymerase in binding to the promoter region. Each sigma factor recognizes different core promoter sequences.

Although bacterial transcription is simpler than eukaryotic transcription bacteria still have complex systems of gene regulation, like operons. Operons are a cluster of different genes that are controlled by a single promoter and operator. Operons are common in prokayotes, specifically bacteria, but have also been discovered in eukaryotes. Operons consist of a promoter, which is recognized by the RNA polymerase, an operator, a segment of DNA in which a repressor or activator can bind, and the structural genes that are transcribed together.

Operon regulation can be either negative or positive. Negative repressible operons, are normally bound by a repressor protein that prevents transcription. When an inducer molecule binds to the repressor, it changes its conformation, preventing its binding to the operator and thus allowing for transcription. The Lac operon in bacteria is an example of a negatively controlled operon.

A positive repressible operon works in the opposite way. The operon is normally transcribed until a repressor/corepressor binds to the operator preventing transcription. The trp operon involved in the production of tryptophan is an example of a positively controlled operon.

RNA polymerase I transcribes genes encoding ribosomal RNA (rRNA) which is a main component of a cell’s ribosome structure. Ribosomes are the site of protein syntehsis where mRNA is translated into a protein.

RNA polymerase II transcribes messenger RNA (mRNA) which is the RNA responsible for providing a stable template for the translation of a protein.

RNA polymerase III transcribes genes encoding transfer RNAs (tRNA), the adaptor molecules that are responsible for bringing amino acids to the ribosome when proteins are being synthesized. RNA Polymerase III also transcribes small RNAs, such as shRNAs and gRNAs.

Addgene's blog, including our popular Plasmids 101 series, covers topics ranging from the newest breakthroughs in plasmid technologies and research to overviews of molecular biology basics and plasmid components.