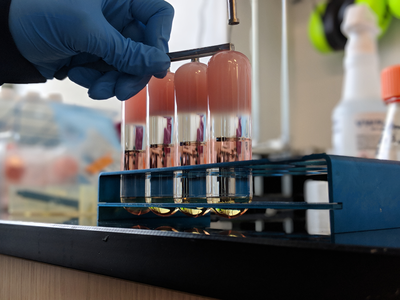 The Penn Vector Core is an internationally-recognized resource for investigators requiring viral-based vectors for basic and preclinical research. The Core has been at the forefront of novel vector development by acting as the distribution center for advanced vector technologies developed in the laboratory of James Wilson MD, PhD, Director of the Gene Therapy Program at Penn. Discovery and engineering efforts in the Wilson laboratory led to the creation of an expanded family AAV serotype vectors with substantially improved performance enabling rapid advancement in the field of vector mediated gene delivery.

“We are delighted to partner with Addgene to improve access to high quality vectors for the scientific community by bringing Penn’s expertise in vector production together with Addgene’s ability to distribute to academic researchers worldwide,” says Julie Johnston PhD, Executive Director of Vector Operations in the Gene Therapy Program at Penn.

Addgene is a nonprofit repository that ships over 150,000 plasmids per year to scientists around the world. In 2016, Addgene introduced a viral-based vector preparation service, which allows scientists to receive some of Addgene’s most popular plasmids as ready-to-use viral vector preparations.

“We see a tremendous need in the research community for high-quality viral vector preps. By partnering with the Penn Vector Core to supplement our own viral vector production, we will be able to serve many more scientists. We are grateful to be working with Penn, one of the global experts on AAV vector production,” says Melina Fan, PhD, Chief Scientific Officer at Addgene.

In the coming months, the existing Penn Vector Core catalog will be transferred to Addgene. The research community can also look forward to the addition of new viral vector preps to the Addgene catalog. This Penn-Addgene partnership will provide an important foundation for the advancement of studies requiring AAV vectors, including but not limited to gene therapy and behavioral studies.

Members of the research community have been eager for access to AAV vectors. Thomas Kash, PhD, Associate Professor at the Bowles Center for Alcohol Studies, University of North Carolina Chapel Hill and member of the NIH-funded Integrative Neuroscience Initiative on Alcoholism (INIA) Consortium says, “[this resource] is helping so many labs forge forward!”

Addgene is a 501(c)3 nonprofit biorepository dedicated to facilitating scientific discoveries by operating a plasmid library for researchers. The repository contains over 60,000 plasmids contributed by 3,600 research labs around the world. Almost one million plasmids have been distributed by Addgene to more than 95 countries - with 12,000 plasmids currently shipping each month. Addgene also provides ready-to-use AAV and lentivirus preparations of commonly requested plasmids as a service to scientists - saving them time and providing thorough quality control. By authenticating, storing, archiving, and distributing plasmids, virus, and their associated data, Addgene is creating a lasting resource for research and discovery scientists around the world.