Luria broth (LB) is a nutrient-rich media commonly used to culture bacteria in the lab. The addition of agar to LB results in the formation of a gel that bacteria can grow on, as they are unable to digest the agar but can gather nutrition from the LB within. The addition of an antibiotic to this gel allows for the selection of only those bacteria with resistance to that antibiotic - usually conferred by a plasmid carrying the antibiotic resistance gene. The following protocol will allow you to make your own LB/agar plates with your antibiotic of interest.

Before you begin this protocol, watch the protocol video below to get a quick idea of how the whole process works.

Note: Unless otherwise indicated, the antibiotic powder can be dissolved in dH2O.

*Note: Carbenicillin can be used in place of ampicillin. Carbenicillin is more stable, so it is potentially more effective at selecting only bacteria containing the plasmids of interest (for example, fewer satellite colonies will grow). However, it is also more expensive.

For example: If you’ll be preparing plates with a final concentration of 100 ug/mL ampicillin, you should make a stock solution of 100,000 ug/mL (100 mg/mL). Simply measure out 100 mg of ampicillin powder, add it to 1 mL of water, dissolve by vortexing, and filter sterilize.

*Pro-Tip* You should leave the molten gel-mix in the water bath for at least 5 min. Do not let any of the water bath water touch the neck or top of the bottle as this water is not likely to be sterile. Cooled agar should be warm to the touch; as a rule of thumb, if you cannot take the molten agar out of the water bath wearing only lab gloves, it’s not likely cool enough to add antibiotic to. To be certain your agar is at the right temperature, we recommend using a laser thermometer. 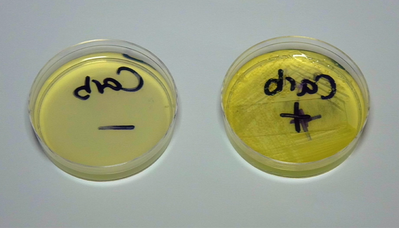 If everything was prepared properly, you should see growth of only the resistant strain. If you get this final result, your plates are ready for use or storage at 4 ℃. You should not store your plates for longer than 1 month at any temperature and should always check for contamination prior to use. 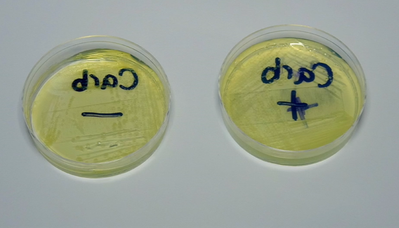 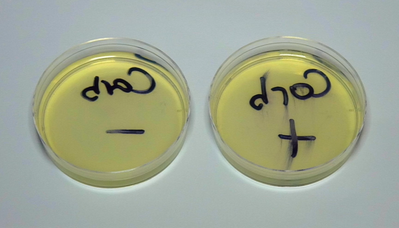 If neither strain grows, it's possible that: 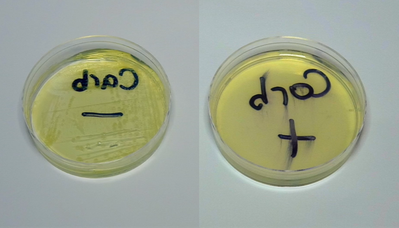 If only the non-resistant strain grows, it’s likely that you’ve used the wrong antibiotic, or confused your strains.