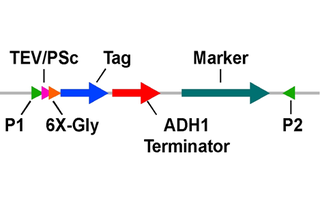 The depositing lab has constructed and deposited here 36 plasmids that can be used to generate linear PCR products to fuse to the 3' end of an ORF in the yeast genome and add (TEV or PreScission protease site) - 6X Gly linker - (12X His, 2X Strep, 3X FLAG, Protein A, or V5) - ADH1 transcription terminator - (KanMX, HphMX, or His3MX).

The other 30 plasmids are all of the possible combinations of the protease site - tag - marker options listed above. After fusion, the modified protein can then be followed with the epitope or purified using the tag and released from the matrix with the protease site.

The constructs were designed with one of two different protease sites to allow a complex with two different tags to be purified in two successive steps, using each protease to release the complex from each purification matrix.

The schematic diagram (see attached above) represents the format of the constructs and shows the proper scheme for producing the desired PCR products (see also below). If only epitope tagging is needed, the upstream primer can be adjusted to skip the protease site (see example below).

Affinity tags were constructed by PCR or by annealing oligos to fit into the XhoI-XbaI gap. This includes 12xHis, 2xStrep II, 3xFLAG, PrtA (2 repeats as found in pBS1479), and V5. Each tag was inserted into each base vector, making 30 templates with all combinations of protease site, tag, and selectable marker.

These two primers (along with 50 nt of homology to the targets at the 5' ends) will amplify the desired product from any of the constructs (the reading frame for P1 is important – alternating codons bracketed).

If only epitope tagging is needed, the upstream primer can be adjusted to skip the protease site. As an example, for the V5-tag-containing constructs, usage of the following primer (5’-(homology)... GGTGGAGGCTCTAGAGGTAAGCCAATTCCA-3’) in place of P1 will omit the protease cleavage site and add only 3xGly and V5 (GGGSR-V5-Stop).