Trying to find a lentiviral plasmid for your experiment? See our lentiviral reference page.

At Addgene, we receive questions daily from trained molecular biologists, along with scientists taking their first plunge into the world of recombinant DNA. By far, the topic most inquired about over the past 8 years has been lentiviral plasmids. For good reason, in the past decade lentiviral vectors have in many ways changed the way all types of researchers do science. Here at Addgene, we’ve sent out over 30,000 lentivectors since 2004 and in February alone we distributed over 800(!). We've assembled some of our most common FAQs below for your reference. 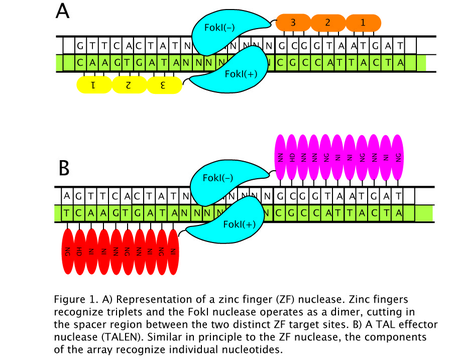 For over ten years, zinc finger (ZF) arrays have been the go-to technology for targeting enzymes and other useful protein domains to a specific DNA sequence ( Fig. 1A ). Scientists have identified a large number of zinc fingers that recognize various nucleotide triplets. With some trial and error, ZF arrays are able to recognize their targets with fairly high specificity. Fifteen years of research has shown that when fused to a nuclease or activation domain, a ZF array is an effective targeting mechanism for molecular tools. ZFs are not without their limitations, however. Not every nucleotide triplet has a corresponding zinc finger, and interactions between zinc fingers within an array can reduce their specificity.

Two years ago, groups led by Jens Boch at the Martin-Luther-University Halle-Wittenberg and Adam Bogdanove at Iowa State University published the nucleotide recognition code of the TAL effectors, which were isolated from the plant bacterial pathogen Xanthomonas. The central TAL targeting domain is composed of 33-35 amino acid repeats. These repeats only differ from each other by two amino acids, their repeat-variable di-residue (RVD). Ultimately, it is this RVD that determines which single nucleotide the TAL effector will recognize: ( Fig. 1B ) HD targets cytosine, NI targets adenenine, NG targets thymine, and NN targets guanine (though NN can also bind adenenine with lower specificity). 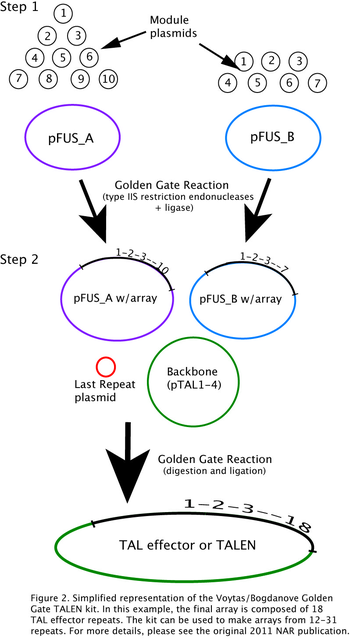 Perhaps one of the most appealing features of the TAL effector arrays is the ease with which they can be made. Intuitively, one would expect that assembling relatively small, repeat-laden DNA regions into a single construct would be technically challenging. Thanks to efforts by the Bogdanove group and Daniel Voytas’s group from the University of Minnesota, arrays can be assembled in a matter of days. In an open access Nucleic Acids Research article that came out in the spring of 2011, the groups describe a set of customized plasmids that can be used with the recently developed Golden Gate cloning method to assemble “multiple DNA fragments in an ordered fashion in a single reaction.” Using these plasmids, which are available as a kit from Addgene, custom arrays consisting of 12-31 repeats can be assembled and inserted into a variety of backbones in just a few steps ( Fig. 2 ). The Bogdanove group also hosts web-based software to help scientists find potential TAL effector targets. The site, which will be updated soon with more features, is already receiving hundreds of unique visitors every month.

The Voytas/Bogdanove TALEN kit came online in the summer of 2011 and has already become the best-selling kit in Addgene’s history. Dr. Keith Joung’s lab at Massachusetts General Hospital also recently released a TALEN kit through Addgene. This kit, first described in Nature Biotechnology in August, uses a serial ligation protocol to assemble arrays. Dr. Joung, co-founder of the Zinc Finger Consortium with Dr. Voytas, has considerable experience in the DNA targeting field. A third kit, a “TALe Toolbox”, from Dr. Feng Zhang’s group at the Broad Institute, will be available from Addgene before the end of the year. Dr. Zhang ‘s lab already published a paper on TAL effectors in Nature Biotechnology earlier in 2011 and will describe this new kit for assembling TAL effector arrays in a forthcoming issue of Nature Protocols (in press). The Zhang lab also hosts a helpful website that provides several TAL effector resources: http://taleffectors.com/

Whether you work in a C. elegans lab and have been struggling to mutate a specific gene or your anxiously investigating gene therapy options for a rare disease in humans, TAL effectors could become a key tool in your plasmid toolbox. Addgene has rapidly become an important resource for this new technology, and we hope to continue to have a strong scientific partnership with both the labs that continue to hone these tools and the researchers who are learning to wield them. Learn more about Addgene’s TAL effector and TALEN kits at www.addgene.org/talen/

See the Q&A with Dr. Adam Bogdanove and his thoughts on the TALe technology here.

September 2011: How to create your perfect MCS

Does this scenario sound familiar - you desperately need to make retrovirus expressing your new favorite gene and the only restriction sites in your favorite vector are also in the coding sequence of your gene? You can remove them by site directed mutagenesis, or settle for a different vector, but why not just improve the multiple cloning site (MCS) of your favorite vector. It is a couple days of work that will pay off for years to come.

The following technique is one way to easily improve the MCS of any vector. Although we will discuss how to add new restriction sites, it is just as easy to add short tags (like HA or FLAG) using this method. For the purposes of this tutorial we will show you how easy it would be to take the very popular retroviral vector pBabe-puro (Addgene plasmid #1764 ) which has a relatively limited MCS (BamHI - SnaBI - EcoRI - SalI) and expand that with the addition of NdeI, PacI, AscI, and MfeI to drastically improve the MCS - and best of all - for maximal compatibility they all work in NEB buffer 4.

Briefly, we will design overlapping oligos that once annealed can be cloned directly into the overhangs generated by restriction digest of existing sites in the original vector.

Designing oligos: We want to add NdeI, PacI, AscI and MfeI sites so we will be generating a top oligo with each of these sequences in tandem (NdeI - CATATG - PacI - TTAATTAA - AscI - GGCGCGCC - MfeI - CAATTG) with the bottom oligo being the reverse compliment so that they will anneal.

We also need to make sure to include the additional bases necessary to compliment the overhangs generated when digesting the vector with EcoRI and SalI (see diagram). To do this we need to add 5'-AATTC and G-3' to the top oligo and 3'-G and CAGCT-5' to the bottom oligo making our final oligos 34bp each.

Order from your favorite oligo synthesis company. NOTE - if you phosphatase treat your cut vector it is necessary to use 5'-phosphorylated oligos. This is an option that can be added when ordering them or can be performed enzymatically later.

Digest and purify vector: While waiting for your oligos to arrive, digest 1ug empty pBabe-puro with EcoRI and SalI and gel purify.

Anneal oligos: The oligos should be resuspended in annealing buffer (10mM Tris, pH7.5-8.0, 50mM NaCL, 1m EDTA) and mixed in equimolar concentrations. We recommend mixing 2ug each in a total volume of 50uL - add additional annealing buffer if necessary to get to 50uL. Efficient annealing can be achieved by one of two methods:

Transform 2-3uL into your favorite bacteria and plate. Be sure to pick multiple colonies for mini-prepping and verify insert by sequencing. And don't forget, if you generate a useful plasmid; share it with the rest of the scientific community by depositing it at Addgene. 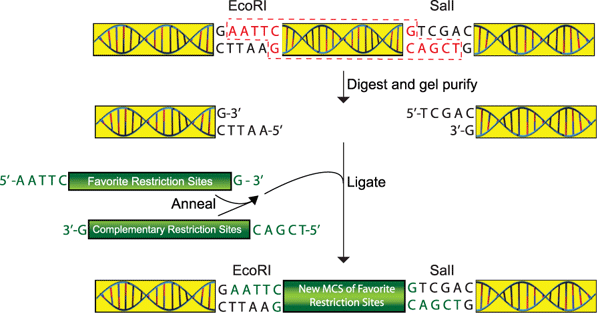